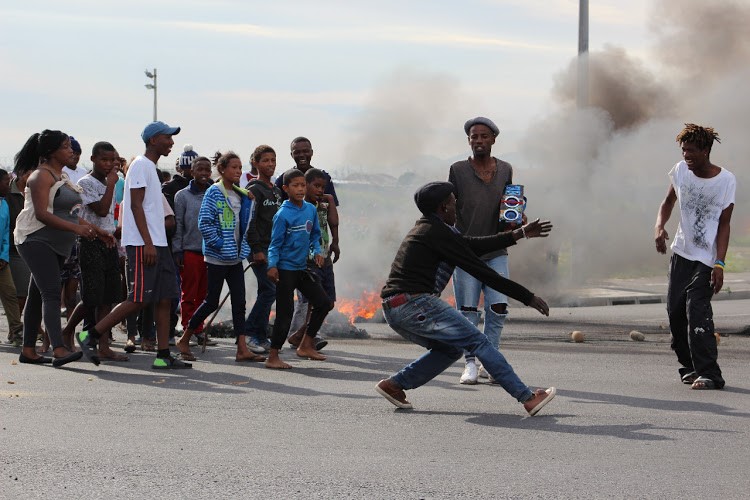 Prince George Drive between Capricorn Park and Steenberg <img src=of data capturers working for the City of Cape Town’s Expanded Public Works Programme, who claimed they were promised R143 per day but were paid only R400 after two weeks.
Image: Kevin Flynn

A protest by about 100 people blocked one of of Cape Town’s main arteries on Saturday.

Police closed Prince George Drive between Capricorn Park and Steenberg when the protesters — many of them women and children — blocked the road with rocks and burning tyres.

The protest centred on the alleged non-payment of data capturers working for the City of Cape Town’s Expanded Public Works Programme.

Some residents of Uitsig Peninsula — who were under the wrong impression that the protest was over land — sparked a shouting match with protesters when they tried to move rocks and burning debris from the road.

There were no injuries during the protest‚ which ended at noon with riot police advancing and protesters retreating into Vrygrond.

The protesters‚ 55 of whom the city employed as part of the EPWP to conduct a survey on the number of backyarders in Vrygrond‚ claimed they were promised R143 per day but were paid only R400 after two weeks.

The project they were involved in aimed to gauge how many people need housing.

Earlier‚ a symbolic land invasion took place nearby on open space next to Prince George Drive between Parkwood and Southfield.

Cape Town metro police spokesman Wayne Dyason said the protest was held by residents of Parkwood to draw attention to their need for housing.