The sleek white gown, with its six strategically placed seams, was stitched from a heavy silk with a subtle sheen. A simple bateau neckline gracefully framed her face. The body of the dress subtly outlined her waist and flowed into a full train. 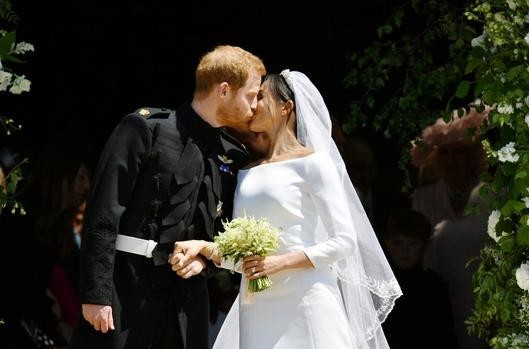 But what was most noticeable were all the things that the dress was not. It was not a Hollywood red carpet statement. It was not a Disney princess fantasy. It was not a mountain of camouflaging tulle and chiffon.
Prince Harry and his new bride, Meghan, Duchess of Sussex leave St. George’s Chapel. Picture: Reuters
The dress, designed by Clare Waight Keller, was free of extravagant embellishments. It was not covered in yards of delicate lace. It did not have a single ruffle – no pearls or crystals. Its beauty was in its architectural lines and its confident restraint. It was a romantic dress, but one that suggested a clear-eyed understanding that a real-life romance is not the stuff of fairy tales. The dress was a backdrop; it was in service to the woman

Meghan’s wedding gown was beautiful, but the woman wearing it was unforgettable
The dress isn’t everything but it is a lot. And the Givenchy haute couture gown chosen by Meghan Markle for her marriage to Prince Harry told a story about contemporary romance, geopolitical history and the institution into which she has married. But mostly, most importantly, it offered a bit of insight into the bride herself.