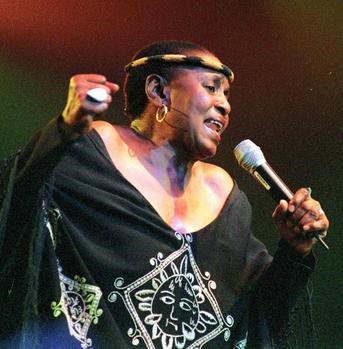 Johannesburg – The family of the late Miriam Makeba and her business manager are expected to square off in court on Monday over the control of the music icon’s legacy.
Makeba’s family have vowed to expose the “fraudulent” activities of Graeme Gilfillan, whom they accuse of using deceitful means to claim Makeba’s intellectual property rights – and the royalties that go with them from her more than 30 albums.

The matter, which is due to be heard in the high court in Pretoria on Monday, is expected to shine the spotlight on the contentious issue of ownership royalties that often pits artists against their managing companies.

In October last year, Gilfillan through his company, Siyandisa Music, filed an application to interdict Makeba’s grandchildren Lumumba and Zenzile Lee from acting as the proprietors of the intellectual property rights of Makeba without approval.

The news that the South African Hall of Fame planned to induct Makeba in November set in motion an acrimonious legal battle that has been raging since 2004. Makeba’s family had earlier learnt that the Grammy award-winning artist had signed “a fictitious” licence contract, called ZM Makeba Trust, with Siyandisa. The alleged contract was signed by Makeba and one of her grandchildren, Dumisani, according to Zenzile.

At the time, Gilfillan was Makeba’s trustee. The singer, who was affectionately known as “Mama Africa”, collapsed after a performance in Italy in 2008 and died from a heart attack a short while later in hospital. She was 76.

“The licence agreement they (Siyandisa) are using to claim the rights is illegal. The name of the trust is not recorded as a trust deed instrument at the Master (of Court) Office. They have no letter of authority, but even if they had one, the issue of Miriam Makeba licensing is illegal,” Zenzile said.

“They made her (Makeba) sign a fictitious Miriam Makeba Trust that doesn’t exist, claiming exclusive rights on that basis.”

As the dispute escalated, the Makeba family started considering taking action against Siyandisa but couldn’t afford the legal fees. While they were still mulling over the matter, Gilfillan slapped them with legal action, claiming that they were not the rightful owners of Makeba’s intellectual property rights and interdicted the grandchildren from using the rights without approval.

According to Gilfillan’s founding affidavit, Siyandisa has “unconditional, exclusive rights throughout the world to use, simulate and portray Makeba’s personality, personal identification and personal experiences, incidents and events”, which occurred in her life arising out of her “theatrical, feature film TV and/or musical stage production or any sound recordings, publications”.

The papers further state that law firm Webber Wentzel had in 2004, on behalf of Makeba, registered a trust on the insistence and at the request of the singer, not as the Miriam Makeba Trust but the ZM Makeba Trust.

“In terms of the licence agreement, Makeba granted Siyandisa the sole and exclusive right throughout the world and from August 28, 2004 in perpetuity, to sue licence and sub-licence the international property rights.”

The Makebas have been left seething, and are accusing Siyandisa directors of resorting to unscrupulous means to claim the rights over the anti-apartheid music icon. Zenzile said Siyandisa was using a licence agreement with “a fictional” Miriam Makeba Trust as their legal document.

Also illogical, she said, was the fact that Siyandisa claim that ZM Makeba Trust and the Miriam Makeba Trust on the licence agreement are the same trust registered. She said, however, that based on the records at the office of the Master of Court, there were only three trust deed instruments relating to Mama (Makeba), the Mama Centre for Girls, Dolly Rathebe Miriam Makeba Charitable Trust and ZM Makeba Trust.

“We have the rights to Mama’s European trademarks. Mama’s legacy is not for sale. We have blood and legal rights and don’t have to explain to anybody,” Zenzile said. In the responding affidavit, she accuses Siyandisa of making defamatory remarks about her and Lumumba “without directly dealing with the unassailable legal flaw”.