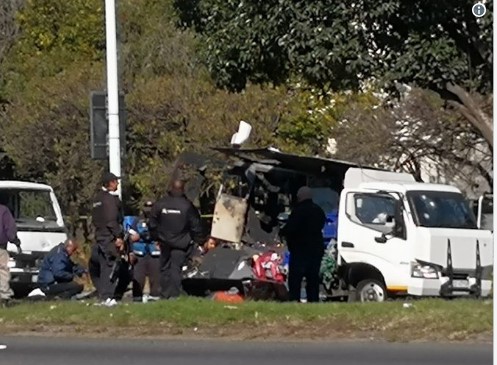 Warning: Strong Language. Another video surfaced of the two cash-in-transit vehicles bombed during a heist in Boksburg‚ Ekurhuleni‚ on May 17 2018. The video was taken from inside a business.

Five people have been arrested in connection with a cash-in-transit heist which happened in Boksburg‚ Ekurhuleni on Thursday.

The five were caught at the George Goch hostel in Johannesburg after police chased them with a helicopter.

Police spokesperson Captain Mavela Masondo told TimesLIVE at the scene on Atlas Road that the police’s speedy response to the heist resulted in the quick arrest.

“We also recovered a rifle after the cash-in-transit heist which happened at about 9.30am. It is alleged that more than 10 suspects who were driving in four vehicles approached two G4S security vans‚” said Masondo.

“They started shooting at the vans. Then there was a shoot-out between the security officers and the suspects. The suspects managed to blow up the cash vans and take some cash.

Two cash-in-transit vehicles were bombed during a heist in Boksburg‚ Ekurhuleni‚ on May 17 2018. The suspects were allegedly travelling in four cars. According to reports five suspects have been nabbed.

“As I’m talking to you‚ the operation is still underway because we believe that some of the suspects are still hiding at George Goch hostel and we hope that we will manage to arrest all of them.”

Two security guards were injured. One was shot in the leg and the other had minor injuries to the head during the shoot-out. The two injured guards were taken to hospital.